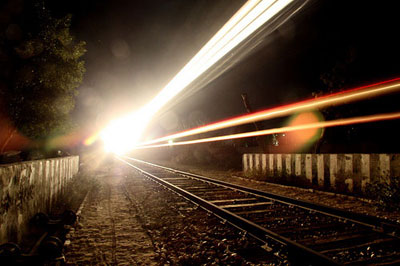 A cold, winter night. The moon shimmers off the slow ripples of the river. The leaves rattle like bones as a coyote trots blithely by. And in the rush of the wind you can hear a faint whistle. You ride on.

The whistle grows louder and a fog suddenly rolls in. A rumbling. Repetitive, mechanical. Metallic but low. You stop. It grows closer but from which direction you cannot tell. Reverberating off the canyon walls, it sounds as if it is coming from everywhere. From nowhere. Another whistle. Clearer, louder, shrill.

Then it appears. A light. Cutting through the fog ahead. And, around the beam of light, the dark outline of an engine. Gears pumping. Belching smoke. Its whistle now a scream.

Your eyes shut. The earth quakes in a steady rhythm. The train approaches, heaving a frigid mass of air towards you. The chill seizes your muscles. The sound is deafening.

Another breath and you open your eyes again. You see the cars stretching back behind the engine into infinity. It is almost upon you.

And then, in a second, it is there. In front of you. Then crashes into you. But through you. You are in it. It is cold wind. It is light in all directions. You almost fall but you catch yourself. It is seconds but it feels like hours. And then it is done.

Darkness. You turn around but see nothing. In the air, only silence. The fog slowly settles. Distant lights of the city. The sound of gravel under your feet as you take a few steps. You turn back in the direction it came. Still, nothing.

But then, from behind, again a faint whistle. A chug. You crane your head back around but it is gone. 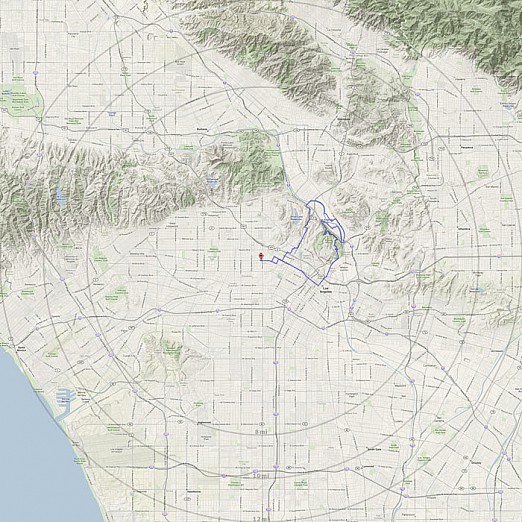