Within the timeline of planets, or geology, or even just the sweep of history, our time here is indeed brief. A lifespan is but a blip in the continuum, really. And then, while it is tempting to think of the ten years of the Passage as a significant run, it mostly feels as if it has flashed by in an instant. So then each weeks ride, within this perspective, is indeed quite a brief moment. Even when it has stretched out into the wee hours of the night (or morning, technically), the time we share out on the streets, weaving through the hillsides, pushing down trails, pales in comparison to the time we spend over our lifetimes sleeping or eating, the time it takes for nations to rise and fall, the lifecycle of mountains and oceans, the formation of planets, moons, stars.

Yeah, okay, maybe were getting a bit emo as we approach the end here.

But this really isnt about that. This is just about the fact that we are firmly in the middle of what Los Angeles calls winter. Which is to say that it is a little bit chilly at night right now. Of course, like time, it is a matter of perspective; our freezing ~48 degrees at night would probably be a balmy day in a Minnesota winter. But, because of this chill, in winter we often get a bit less ambitious with the nighttime riding. No reason to do that wee hours stretch when it requires so much bundling up. There is plenty of other time in the year when the nights are glorious. In winter, our brief moments typically get briefer.

Like, for instance, this weeks ride. Now, it will be nothing like last week, when the rain led us to Shatto Lanes for the briefiest of rides. But it should indeed be a reasonably expeditious expedition. A few miles, a few hills, bing bang boom. Again, it is a matter of perspective -- 2025 miles is likely more than a few to some people. But relatively speaking, for us, there is nothing too crazy this week. But we like to think that our nothing too crazy is still a pretty good time (and maybe still a little crazy?). So, while we can't quite remember the exact origin or meaning of the ALC Team Midnight Ridazz inside joke word, "breefy," we're going to imagine that it meant something that was both brief and beefy. Relatively short, but nonetheless substantial. And that seems like a pretty good description of what we have in store for you this week.

We hope you will spare a few of your moments to briefly join us! 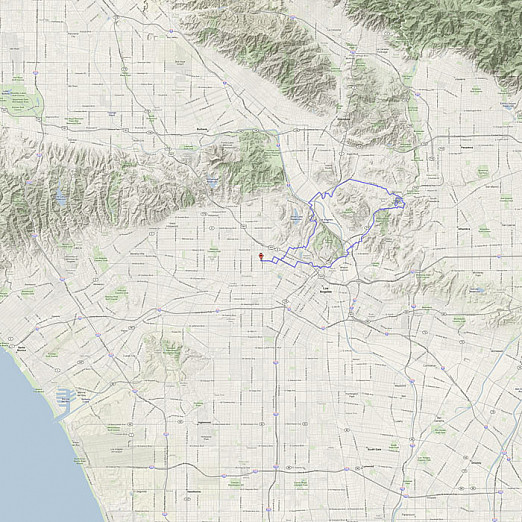