A bunch of people have asked why we chose to include a route as recent as Exquisite Corpus amongst our short series of ride revisitations. Unlike older routes, many of our current regulars will likely have already done this one. This is true. And nothing went particularly wrong, in need of improvement or readjustment. Also true. But as we visited the little free libraries spread around town we found that several of them were sadly understocked, or contained only books of questionable quality/interest. So we figure maybe we can help out with that a little and this week ask each rider to bring a book or two that you can spare and help us replenish the shelves when needed. Anyway, though the route will roughly be the same, we'll find a whole new story waiting for us this time around.

The exquisite corpse is a Surrealist game where a story or drawing is created by a group of artists. One person starts it off and then folds down the paper to cover most of the text or image before passing it to the next person, who must then continue with but the smallest hint of what has already come. As the page circulates from one hand to another, it becomes more and more detached from the direction of the originator, driven by each contributor's desires more than any coherent narrative or representational logic.

One can imagine that a bike route could be developed in such a manner, with the drawing and the folding and the passing around. However, since our routes are already incredibly meandering, often responsive to multiple simultaneous logics, it probably wouldn't be appreciably more "surrealistic" than most of our other rides.

But a route map, rather than being the result, can instead be the process itself: this week, our journey through the streets will be the folds, stitching together (rather than obscuring) fragments from the body of texts located throughout the city. Together, we will create a nonlinear story, nonsensical except as a record of our movements and their interface with the desires of those who placed the source materials. 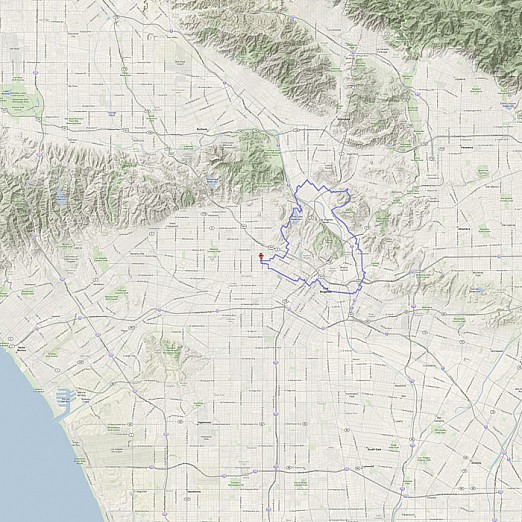