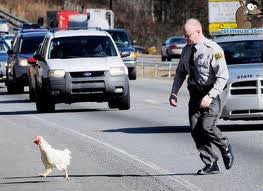 In an effort to keep all of us safe, the good folks in charge of traffic tickets decided a little while back that it was time to crack down on the public safety scourge that is... jaywalking. Yes, for too long the unruly mob has felt it their right to cross the cars' thoroughfares just any dang time and place they please! Don't they see the red hand flashing? It's flashing for you, pedestrian, because it cares about your safety. Otherwise you might hurt someone by gently slamming your body into one rapidly moving metal object or another.

Now, of course, "jaywalking" itself is a social construct of relatively recent advent. Before the motor age, streets were open to all. Pedestrians ambled, horses trotted, trolleys rolled, vendors hawked, children played. "Traffic" in the modern sense of congestion was not really spoken of because "traffic" was the nature of street life: it was a shared space of social traffic. Speeds were slow. Not that accidents didn't happen, but they could generally be legitimately called "accidents" rather than being simple physical realities of weight and velocity differentials that make most of today's automotive incidents hardly "accidental": the danger is by design. The only way to avoid those "accidents" is to avoid the offending vehicles (or, you know, remove said vehicles; just a suggestion). So the motor interests needed to reframe the problem. It wasn't that a dangerous new interloper was intruding upon a traditionally shared space, but that the other users of that space hadn't adjusted to the realities of modern times. They were hicks, bumpkins, yokels -- or, in the parlance of the time, "jays." And they walked like it.

In retrospect, however, we can view these "jaywalkers" as the ones who really knew what was up. The roads were theirs as much as anyone's, were a common good. They didn't talk about "complete streets," like the forward-thinking among us do now, because they didn't know any other kind. They were just "streets." We don't, however, want to over-romanticize the past. People also at one time used to throw their garbage more or less out their windows into those same streets. Some amount of a social contract in regards to the good of the individual versus the good of the group is necessary for safety, for hygiene, for justice. But we do think it might be worthwhile to reclaim the sobriquet of jay from its tarnished roots. Since that original implication of country backwardness is largely absent from its modern meaning, can we not do away with its negative connotation altogether? In short, if not following motor logic makes one a "jay," maybe being a jay isn't so bad after all?

Which isn't to say we're going to ride all rebelliously-like this week, breakin' the law, breakin' the law. No, we all know that isn't our style (and also doesn't really accomplish anything). But what if "jay" came to mean someone who (respectfully) disregards an illogical system or way of thinking? And, you know, a good bike ride is often a process of getting it wrong in all the right ways. Cycling in this city is supposedly dumb. It's supposedly crazy. Or, if you do ride, you're supposed to stick to the bike lanes, or the river and beach paths, or CicLAvia. Well, once again this week we'll prove our utter stupidity as we twist and wind our way down the city's streets. 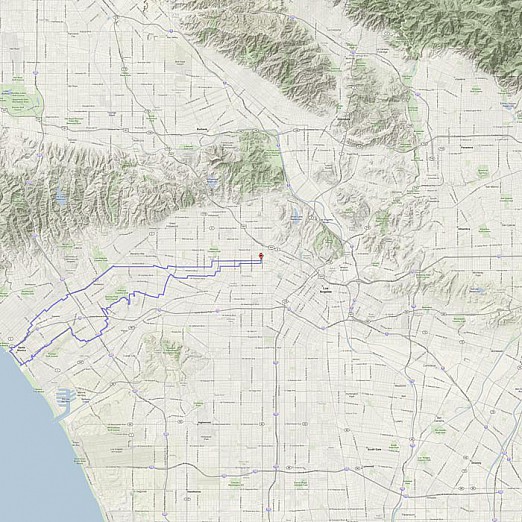