While the history of every city necessarily involves a process erasure and renewal, Los Angeles has often seemed especially callous in its willingness to bulldoze vibrant neighborhoods in the name of progress. And then, typically, we have been given another highway, or some office towers, or sometimes a school or a shopping center; once, we got a baseball stadium. The "civic" always trumps a community.

This week we visit a place where the neighborhood was removed and we received -- nothing. Well, at least nothing in the sense of, "Look, there, at that monument! That's a fine monument, isn't it? A very picturesque and sturdy monument indeed." Nearly 700 buildings were razed but the land they stood on was left empty. The grid of roads remains, like the neighborhood's ribcage pushing through the ground, its body having been buried in too shallow of a grave. Otherwise, the only signs that there was ever life there are a few streetlights, a row of palms, stone steps leading up to the nonexistent front door of nothing. Mostly one notices, surrounding the plot, the chain-link fence topped with barbed wire.

But, if we look closer, we might also see a butterfly or two. Or 50,000. For, while all other plans to develop the land eventually disappeared like the neighborhood itself, the one thing that remained was this: a butterfly sanctuary. And, apparently, all they need is space, no structures and no people: a field.

If a community is going to be erased, it is at least nice that we can do something for our insect friends. Much better than some lame freeway. 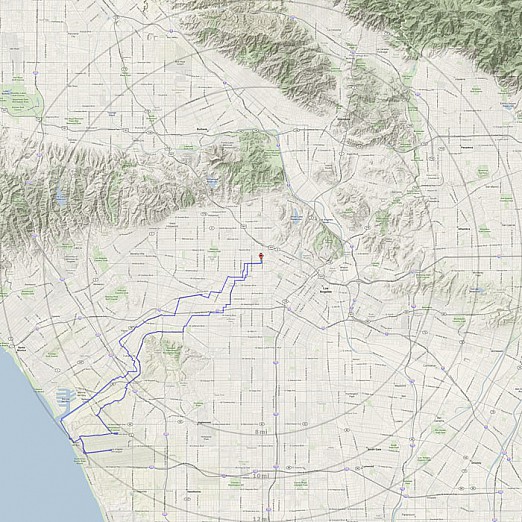